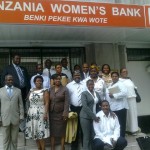 DA MPL Veliswa Mvenya (front) with members of the Eastern Cape Portfolio Committee for Social Development during a study tour to Tanzania.

MPL Veliswa Mvenya, who also handles the Social Development-portfolio for the DA in Bhisho returned from a study-tour to Tanzania recently where it turned out the South Africans taught their hosts a thing or two.

“There weren’t anything much we could learn from them. South Africa is the best compared to Tanzania in terms of fighting poverty. Tanzania is still very poor, with no infrastructure and no proper oversight.

“We were a multiparty-group and went there to learn best practices on how to monitor NGO’s and social development projects, as well as what kind of projects they run and how parliament oversees the departments,” she said.

“The only good thing about them is that they a HIV/Aids-council that falls under government and it is well run and funded by government and international donors like the USA. Another positive thing is that they have a women’s bank helping businesses to start,” she said.