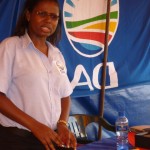 Following recent calls by President Jacob Zuma for the revitalisation of Mthatha, serious questions have arisen about the practical realities of his statement. He claimed in the media that his government “would never allow” the former Transkei capital to continue collapsing.

Anyone who has driven through Mthatha in recent years will attest to constant electricity outages, broken traffic lights, raw sewage in the streets and general decay. In recent months the city has also been suffering the mother of all traffic jams in the city centre daily, since work started on fixing the main roads.

Local Government portfolio committee member Veliswa Mvenya has come up with some significant facts about the funding of the so-called revitalisation of Mthatha. In a reply to a parliamentary question by Mvenya, Local Government MEC Sicelo Gqobana revealed that according to the Comprehensive Infrastructure Plan (CIP) dome for the municipality, a total of R3, 208 billion would be required for infrastructure backlogs in the King Sabata Dalindyebo Municipality, of which Mthatha is part. The electricity backlog is R1, 250 billion. However, in the 2009/2010 financial year, an allocation of only R33 million was made via the Municipal Infrastructure Grant.

Zuma promised during his visit that he would send a delegation led by the minister of Performance and Evaluation in the presidency. This is yet to happen.

“We need to get the message out there that the ANC-led government continues to make empty promises and to play on people’s emotions. Mthatha needs a serious turn-around, but it needs to be driven by people who are committed to getting the job done,” Mvenya said.