MUNICIPAL WORKERS UNION SHOULD PAY FOR THE MESS 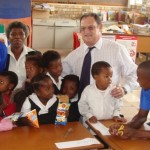 Local Government spokesperson Dacre Haddon has had some harsh words for members of the Municipal Workers Union (Samwu) who embarked on strike action this week.

Scenes of streets being trashed and bins being overturned are still fresh in the mind of residents of most cities and town in the province.

Haddon has sent a formal parliamentary question to the MEC of Local Government, Sicelo Gqobana, to enquire who should be responsible for footing the bill for clean-up costs and damages.

“The strike smacks of opportunism because there are adequate recently agreed mechanisms and processes in place to deal with such grievances.

“Little or no legal action has been taken against the trashing culprits before. Samwu must be held criminally and civilly liable for any such action by their followers during a strike,” Haddon said.

“It is interesting to note that the other national municipal union Imatu elected not to participate in the strike. With a 13 percent wage agreement implemented last year for all municipal staff, the hard pressed consumer is again being asked to fork out more to reward workers who frankly are not adequately servicing the municipal needs of the country as seen by ongoing service delivery protests country wide.

“The action shows the country that Samwu is governed by a self interest agenda rather than an agenda for service to the overall good of the country.

“While acknowledging the Constitutional right to strike, this must always be done in a responsible manner and when all other avenues to seek a solution have been exhausted,” he said.