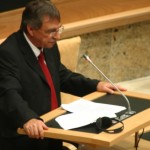 The Democratic Alliance in the Eastern Cape has embarked on a “pictures of potholes” drive in the province, as part of an attempt to get government to address road maintenance.

Pine Pienaar, provincial spokesperson for roads requests all road users to photograph pictures of major potholes and e-mail them to him.

Pienaar’s drive is in order to support Stuart Farrow MP, DA National Spokesperson on Transport, who will be making a presentation in Parliament later this month. Farrow is hopeful that with the correct information on the state of roads supported by pictures he may be able to divert some of the road fund levy towards metros and municipalities.

What is needed are:

1. Good, clear photos of large potholes with the exact location of the pothole/s. Please provide a road name/route number and also state the province

2. These potholes should be on provincial and even district roads and where there has been significant neglect of such roads.

3. Potholes in areas where access is being compromised due to the pothole or where the roads have become dangerous.

The photos together with a clear indicator of where they are need to be emailed to Pienaar on the following email address:

This is an opportunity for ordinary citizens to assist the DA in strengthening the case of the Eastern Cape when it comes to the debate about equitable share. We must show that this province does indeed have a serious backlog when it comes to road maintenance and that it should be allocated a bigger budget to address the problem.