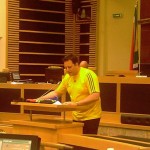 John Cupido, MPL, delivering his speech on Sport, Recreation, Art and culture in the Bhisho Legislature

The budget for the department of sport simply isn’t enough to carry forward projects such as Bayworld, the Mthatha stadium and the various sporting codes in the province. Innovation and forward thinking is required, Sport, Recreation, Art and culture committee members John Cupido told the Legislature this month.

“Bayworld is constantly advertised by the municipality and this province as Port Elizabeth’s premier tourist destination. It featured highly in the city’s campaign to become a Host City and to receive the stadium that stands there today. Yet the department has allowed this facility to fall by the wayside.

“Saving Bayworld without completely bankrupting other departments requires a three faceted approach. Firstly, the MEC needs to urgently approach the National Ministries of Sport and Recreation or Tourism for immediate funding to make essential repairs. Secondly, a public, private partnership (PPP) needs to be created between Provincial and Local governments and the private sector to maintain the facility at acceptable standards. Finally, the same or a similar PPP needs to work on the long-term goal to expand Bayworld to be a world class facility, similar to that of uShaka in Durban.

“There is consistent proof that properly managed Public Private Partnerships (PPP) has been the only way to resurrect embattled public facilities such as Bayworld,” he said.

Cupido further stated there is no funding budgeted for the completion of the Mthatha Stadium in the department’s budget for 2010/2011.

“On an oversight visit to see the state of completion of the stadium, I was highly impressed with its development, and more importantly, what it will be when completed.

“If completed, this will be a beautiful multi-purpose stadium with a main field, practice fields, a full professional athletics track and field. The effect that a facility such as this will have of the development of sport in the Eastern and most rural part of the province is exponential. There is between R420 million and R600 million needed to complete the project, yet, other than what is stated in the committees report, there is no further mention of sourcing the required funding.

The MEC needs to source funding immediately from National Government because if we do not keep the momentum going, I strongly fear that this stadium may become a white elephant.

He added that the time is ripe that sport is allowed to develop at the source of the talent.

“The province needs to think ahead, build up either Bay United or Blackburn Rovers to PSL Level. This is done by securing talent within the province and by building the brand of the team. Having a PSL Level soccer team would be half the job done.

“The other half of my plan to sustain the stadium and to develop the provinces sporting profile is the creation of the Southern Spears or Southern Kings, as they were also called.

“To do this, the MEC needs to insist that the Minister of Sports Development, Makhenkesi Stofile, intervenes and helps to finalise the creation of this team and that the promises of them becoming a Super 15 or Super 16 team are held.

“Then, the province needs to invest in the retention of talent within the province. It was once mentioned to me that thirteen of the 20 Sharks players in one of their recent games, originate from the Eastern Cape. We need to find a way to retain that talent,” he said.

“Again, a properly managed PPP between the province and a major potential sponsor like Mercedes-Benz or VW would facilitate. Once the brand and viability of the team is sustainable, then the province can step back and enjoy the economic spoils of having premier quality teams.

“I must point out that during a campaign like this, politicians must exercise rigorous oversight on the money that we give, but without getting too involved. It is my belief that the only place for politics in sport is for politicians to raise funding for development of sport, no more than that,” he said.