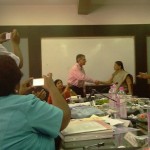 Pine Pienaar, middle, visited India recently with the Portfolio Committee for the Office of the Premier.

Given the dire situation in which the Heath Department finds itself, the DA had no choice but to reject its budget proposal.

However, health spokesman Pine Pienaar has congratulated the department for finally appointing an HOD and for an announcement by the MEC that more emphasis will be placed on the development of Public Private Partnerships (PPP) in future.

“This is welcomed by the Democratic Alliance. If the ANC pays more attention to what we say in this House, then this department would not have been in the predicament it finds itself,” he said.

“PPPs create the opportunity for successful entrepreneurs and businesses to team up with government projects to achieve specific goals. Achieving these goals can be measured by all the parties involved, thus creating a mechanism so that partnerships that do not reach their goals in terms of cost and efficiency can be discontinued immediately. It creates the further opportunity of training, skills transfers, job creation and empowerment. Off course, successful projects will also achieve real service delivery,” he said.

Pienaar explained that the DA rejects the budget proposal for the department for 2010/2011 due to a lack of integrity in the figures.

“The budget allocated is obviously not enough to run this department for this financial year. I challenge the MEC of Health to please explain during this debate how he is going to manage to keep this department a float on this meagre budget.

“It has been allocated R13, 34 billion for the current financial year. But what you see is not what you get. Of the budget we have carried over accruals in unpaid accounts of R994 million, so we have to deduct almost R1-billion from our budget. Add to that that the R169-million in OSD and R380million in HROPT that we had to pay on instruction of the national government, that equates to another R549-million we did not budget for.

“Also keep in mind that we have a bank overdraft in the department of R468-million, and the grim reality is that our entire budget has now shrunk to R11, 3-billion. Something has got to give. Somewhere someone is going to have to be short-changed. Somewhere someone is going to die because we don’t have enough money and we are not spending the money we have, wisely. Already 180 babies died in only one hospital in the Eastern Cape,” he said

2 comments on “PIENAAR BAD NEWS AND GOOD NEWS FOR HEALTH”