WATER CRISIS IN EASTERN CAPE IS DUE TO POOR MANAGEMENT — HADDON 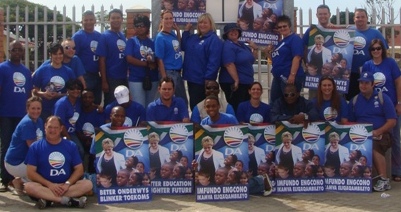 Dacre Haddon (MPL), far left, with the DA Youth during a recent information campaign in New Brighton in Port Elizabeth.

The drought in this province has been with us for over two years yet little or no planning from the Department of Local Government has been forthcoming,” he said.

He said that on-going lack of maintenance and replacement of infrastructure has been a major cause of the water crises in the province.

“I was informed by the MEC that 16 Water Service Authorities had Water Service Plans but the remainder of municipalities in this province made plans in conjunction with their IDP’s merely as compliance tools and not planning tools.

“After a two year drought when our water situation is dire the Metro proudly announces it started interventions to save water in March 2010! The Metro council only gave approval for the declaration of the Metro as a disaster area on 25 March. This was gazetted on 23 April 2010.

“So what are some of the crises “interventions” by the Metro:

“What should have been happening since the drought occurred is the following:

If these measures had been put in place earlier the suffering of citizens and job losses could have been minimised:

a) Prevention of water leaks by on-going infrastructure maintenance;

Speaker the house needs to be aware that Umtata looses 70% of its drinkable water through leaks.

The Metro looses 37% of its drinkable water through leaks

b) Recycle of industrial effluent must be undertaken.

He said that solutions and positive way forward to maintain a sustainable and healthy water situation in this province were:

1) The MEC must be aware as to his legal obligations with water management.

2) As a legislature we must now be proactive and ask for Petitions from communities so we can on an ongoing basis budget correctly and immediately attend to water problems – especially infrastructure maintenance.

3) As promulgated in the National Water Act Preamble to chapter 8 we should encourage greater public involvement in Water User Associations and have these as mandatory bodies in all municipalities.

4) All municipalities should have the minimum required amount of qualified Water Engineers.

5) All Municipalities should have short, medium and long term strategic Water Service Development Plans as proper and on-going planning tools.

6) These plans should be regularly communicated to communities through Water User Associations.