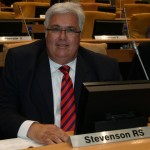 Bobby Stevenson, leader in the Bhisho Legislature and spokesperson on finance.

Now that a successful World Cup is over, we cannot sit back and bask in the glory of its aftermath. We need, once more, to focus on the very real issues of service delivery.

Last month, on the eve of the World Cup, the provincial legislature passed a defective budget with huge implications for health and education opportunities.

The Democratic Alliance took the historic step of voting against the budget. Our opposition, in particular to the budgets for the two big departments of health and education – which constitute 75 percent of the budget or R36 billion out of R48bn – have resulted in us not being able to support the provincial budget this year.

We do not believe the figures for Health and Education have integrity. These departments are going to overspend and not keep within their existing budgets. This was confirmed by the MEC for Health, Phumulo Masualle, who, in reply to my question, informed the house that the budget for Health was not adequate.

The director-general for Health, in an interview with the Daily Dispatch, was also quoted as saying that he needed R2,9bn more.

The budget figures that have been approved are simply not credible. There are cost structures in place that are now running and at this stage there is not secured funding to sustain this.

If these two main departments overspend again they will plunge this province into financial chaos. Last year the province overspent by R2.8bn, of which R2bn will be topsliced from the equitable share over the next three financial years. If we again overspend by R2.8bn there will be no increase in the provincial budget next year.

It is said that the road to hell is paved with good intentions. We cannot simply go forward in faith when there is no guarantee that funding will be secured. The budget needs to be re-prioritised.

Given the pressures on the national fiscus it is unlikely that this province will receive a national bailout. Given this assumption, it is important that we look inward for solutions. This means tighter financial management and public private sector partnerships, as well as value for money.

This is linked to the DA’s second objection to the present budget: the tender process. There is an urgent need for this province to undergo tender reform. It has been estimated that up to 20 percent of our goods and services and capital budget is being lost through corrupt tender practices. By this I am referring to rip-offs, over-pricing, poor workmanship and outright corruption. In our province this would amount to R2,6bn. This figure is higher than 11 out of the 14 departmental budgets.

An initial and simple step which could be taken is to prevent provincial employees trading with the province.

In April, the acting superintendent- general of the Education Department, Professor Harry Nengwekhulu, whose contract expires today, stated that up to 90 percent of senior officials were trading with the department and that it was rotten to the core.

Thirdly, this budget is not innovative enough to meet the needs of the province. A budget is a political instrument whereby the governing party implements its policies and ideology.

From the DA’s perspective a budget that is underpinned by the concept of a developmental state and cadre redeployment can never provide full value for money.

The ruling party needs to break out of its ideological strait jacket. It cannot be ideology as usual when it is service delivery unusual.

l Could a major hospital be run more efficiently if the management of that hospital was outsourced to the private sector and that same hospital was allowed to collect its own fees?

l Could one maintain some schools better if one sold off surplus land around those schools and used those funds for the improvement of the infrastructure of those schools?

l Is there not scope for examining whether one could exchange provincial land for a development or road, for example, with a private entity?

Fourthly, we believe that the amount of savings that have been identified from non-core expenditure – R484m – is insufficient. There are other cuts that can be made.

Last year in June and November the DA warned that this province was sitting on a fiscal time bomb, particularly concerning the Health budget. This has huge implications for the overall financial wellbeing of this province. Once more the danger lights are flickering.

This budget needs to be reworked, re- prioritised and certainly become a lot more innovative.