CUPIDO TO MEET WITH MOLTENO RATEPAYERS 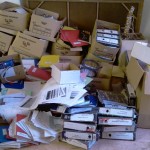 Recycling plant? Actually it is the “filing system” at the Inkwanca Municipality offices in Molteno, as discovered by the DA Leader in the Chris Hani district constituency, MPL John Cupido.

The administrative mess discovered by MPL John Cupido during a visit to Molteno recently has sparked plans for a follow-up meeting with local ratepayers and a call from the Democratic Alliance that the Inkwanca Municipality be placed under administration.

“I came across this mess when meeting with one of the municipal officials regarding the municipality’s flouting of legislation in the determination and implementation of property valuations and subsequent rates,” Cupido said.

“I have informally strongly suggested to the MEC of Local Government and also to the Chairperson of the Local Government Portfolio Committee that the municipality needs to be placed under provincial administration”.

Cupido was told during his visit that the “filing system” was the financials for 2007, 2008 and 2009. “The photographs were taken in the closest thing to a meeting room at the municipal building in Molteno.  The same room is used by any and all employees to meet and to have lunch.  Everyone has access to these files”.

It is also alleged that the municipally is “over employed” with non-functioning staff who are all friends and family members.

Cupido and MPL Dacre Haddon, as member of the Portfolio Committee on Local Government will be making a trip to Molteno to meet with the community and Ratepayers Association.