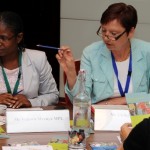 Getting around...When the Bhisho MPLs are not addressing queries by citizens of the Eastern Cape or attending to legislature business, they are also tasked with other pressing issues. On this photo MPL Veliswa Mvenya (left) is chairing a breakaway session at the Commonwealth Parliamentary Association’s International Parliamentary Conference on Climate Change, which was held in London from 12-16 July. Mvenya’s topic was “gender and climate change”.

The recent election of the new Deputy Speaker in the Provincial Legislature, Bulelwa Tunyiswa-Gqoboka, had everything to do with the factional politics in the tri-partite alliance and nothing to do with the performance of the previous deputy speaker, Neo Moerane, says MPL and DA Caucus Chairperson Veliswa Mvenya.

Barely a year after her election, Moerane was forced to resign.  This is a sign of the ongoing tensions in the tri-partite alliance which is retarding service delivery in this province.   This also manifested itself on 28 June at an election for a Speaker and Mayor in the Mnquma Municipality (Butterworth).  There were three candidates for the election, two ANC and one DA (Zama Bomela).  After the first round the SACP aligned candidate fell out and the DA candidate lost by a mere five votes in a council of over 60 councillors of which only two are DA councillors.

“The ANC will continue to be consumed by internal battles which mean that their focus is not on governing.  This was proved when 14 ANC MPL’s stayed away from the sitting where Tunyiswa-Gqoboka was elected,” she said.

“In the spirit of promoting opposition unity I nominated Zukiswa Hlekiso-Thabaneng (UDM).  She received all 17 opposition votes.  This shows the extent to which opposition co-operation is growing in the Provincial Legislature.  We are united in our efforts to improve governance in this Province.

“Voters in the coming municipal elections need to vote for change and put the opposition into power,” Mvenya said.