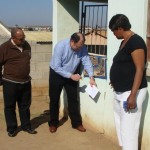 Bethelsdorp DA ward co-ordinator, Elizabeth Williams-Tshazibane (right) points out cracks in her house which have worsened over the years. With her is left, DA Councillor ward 34, AB Meyer, and provincial spokesman on housing, MPL Dacre Haddon, taking a closer look at the damage.

Recent on-site visits have compelled Haddon to call in the help of Local Government MEC Sicelo Gqobana at the Rent-to-Buy housing scheme in Bethelsdorp Extention 32, while in Jansenville the exposure of irregularities concerning a RDP housing project was so alarming that the DA has decided to compile a formal statement to be handed over to the Minister of Human Settlements, Tokyo Sexwale.

“The houses in Bethelsdorp are a hazard to the people living there,” Haddon said. The Rent-to-Buy project, instituted the 1990’s, was built on clay soil and the houses are now collapsing.  As a result the residents have to endure lack of privacy because of holes in walls and endure whatever the temperaments of the weather in the Windy City.

In addition, many of the residents have properties next to the river and have been victims of numerous floods due to insufficient drainage construction

“Upon my visit I was informed by residents that the houses are so badly built and damaged that they should be condemned.  The Provincial and Metro Housing departments are to blame for appointing an incompetent contractor. Why has this contractor not been brought to book?  The government is not serious about adequately housing our population in decent habitable housing,” he said.

“I shall be taking the MEC for Housing in the Legislature to task on this matter by raising this issue at portfolio committee and asking for response and explanation and ensure that sufficient budget consideration is immediately given to this matter.”

The exposure of irregularities in Jansenville followed a visit by Haddon and DA Shadow Minister of Human Settlements, MP Butch Steyn.

The Democratic Alliance will be tabling a motion to the Provincial Legislature asking for a forensic audit into the affairs of the Ikwezi Municipality amidst allegations of gross mismanagement and corruption.

“Having visited the town on 10 June, I saw horrors pertaining to housing delivery,” Haddon said.

Some of the issues established during a public meeting revealed by the residents were:

It has also come to light that some of these beneficiaries rent out their RDP houses for R500 to R800 a month.  The question whether these beneficiaries are in actual need of these houses also needs to be investigated.  According to the records this project started in 1996 as a mud house project of 75 houses and has evolved into a RDP project.  Some of the residents who have applied for a house in 1996 are still waiting to hear from the department whether they have been approved.

“We will compile a formal statement to be handed over to the Minister of Human Settlements, Tokyo Sexwale.

“Is it fair that the people of Jansenville have to suffer the indignity of shocking services because of malice and bad management from their council officials?  Once again, the people and the community suffer as they do not get access to their Constitutional rights of service delivery.

“The residents of Jansenville have lost confidence in their ANC council and are fed up with the on-going poor service delivery in this municipality,” Haddon said.