PIENAAR: “WE CANNOT STOP POINTING OUT THE PROBLEMS 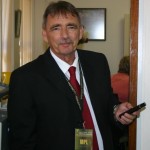 An issue of major concern has emerged lately following the provincialisation of a number of small-town hospitals.

“It took the Eastern Cape Department of Health only three months to plunge the well-serviced and functional Dordrecht Hospital in a financial crisis,” Pienaar said recently  The Democratic Alliance learned with concern that since the facility became state-funded, no payments had been made to the hospital. The staff had not received their salaries and medical supplies had been running low.  Similar problems emerged at the Kirkwood- and Kareedouw hospitals.

Despite many challenges, these hospitals have rendered impeccable service and have had a sound track record as far as service delivery is concerned.  Unfortunately, this level of service delivery is now under threat due to increasing financial constraints.    Staff did not get paid because they weren’t on the government’s Persal pay system and supplies were running desperately low, because subsidies from the Department of Health had not been paid.

Pienaar wrote to the MEC and was in daily contact with the HOD of the Department to ensure that they intervene directly.  He can gladly report that issues at the Dordrecht- and Kirkwood hospitals have been resolved.  “The Department phoned me to thank the DA for bringing the problems to their attention,” he said.

One comment on “PIENAAR: “WE CANNOT STOP POINTING OUT THE PROBLEMS”