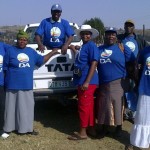 Foot soldiers…MPL Veliswa Mvenya and her team did some hard campaigning in her constituency in Butterworth, where a by-election was held on August 25.

An opposition that continues to ask probing questions has left the ruling ANC feeling “uncomfortable”. This emerged when Local Government portfolio committee member Veliswa Mvenya and other members of opposition parties asked questions about the controversial purchase of five farms by the OR Tambo Municipality.

R45million which was spent to buy the farms in Kokstad.

The opposition members were part of the Bhisho Legislature local government portfolio committee that undertook a two-day oversight visit to the farms.

“There was no point in us going there when we could not ask questions,” the DA’s Veliswa Mvenya said.

The visit came months after reports that OR Tambo mayor Zoleka Capa allegedly used council funds without approval to buy seven farms now managed by the Ntinga OR Tambo Development Agency, which is headed by her husband.

The DA, UDM and Congress of the People said they were taken to the seven farms on but there was very little farming on account of a winter slowdown.

Mvenya said they were shown cattle, “but we don’t know who owns them”. Although they were told that there were sheep, UDM’s Jackson Bici said they did not see any.

Tensions rose during a briefing meeting where the district municipality was grilled. When they asked questions, Mvenya said, no forthright answers came and they were told to “take the document (of information) and not ask”.

Bici said: “They were uncomfortable with questions asked.”

Ntenjwa said some ANC committee members were uncomfortable with the opposition probing issues.

“It was suggested that we did not know our role. Our line of questioning was questioned,” he said.

Mvenya alleged that committee member Phumzile Mnguni, of the ANC, told the meeting that there was nothing they could appreciate in an ANC government.

Ntenjwa also fingered Mnguni. “He is the one who thought we asked questions because of the parties we represent,” he said.

Contacted, Mnguni hit back, saying they had gone on the visit having condemned the district municipality without basis.

“You had a situation of the opposition that came to a visit with a stance and attitude that was clear.

“We were to visit seven farms, but when we were on a third farm they were less interested. We insisted on visiting all the farms,” Mnguni said.

He said he had concerns with the questions the opposition asked.

“In the line of questioning, we were moving beyond our scope of mandate to question the council decisions.”

Mnguni also said some of the answers were available from the thick file given to them.

Committee chairperson Mlibo Qoboshiyana said there was an asset register and other documentation about the farms made available.

“The district municipality gave a document with detailed information,” he said.