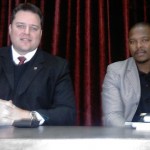 DA MPL John Cupido and Legal Advisor Sicelo Nzuzo, at a public hearing in Queenstown recently on the proposed merger of the Eastern Cape Tourism Board and the provincial Parks Board.

Good news for the Port Elizabeth Opera House is that R21 million has been budgeted by the Department of Arts and Culture (DSRAC) for renovations. This emerged from a written legislature question by Sport, Recreation, Art and Culture portfolio committee member John Cupido. According to the DSRAC MEC, Xoliswa Tom, the decision for the funding was made against the background that the Opera House is a Heritage site and the second oldest theatre in the country. She added that the department transferred R2 million to the Opera House in the 2008/09 financial year for upgrading and lighting of the stage.

Tom stated that there is no plan to upgrade the Guild Theatre in East London in the next three years, due to budget constraints. She said: “The Department however assists the institutions through fundraising for the national department and other prospective funders.

“The department is however aware that Guild Theatre has recently received funding from the Lotto for renovation to the Theatre roof, painting and re-carpeting”, she said.

Both theatres are owned by the Department of Public Works, which is the custodian of government buildings.

In reply to another question by Cupido about the future of Bayworld in Port Elizabeth, the MEC replied that she had raised the issue with her counterpart-MECs for Economic Development and for Education, and with the mayor of the Nelson Mandela Metro. “Submissions have been made to Provincial Treasury as well. The challenge requires an integrated development strategy,” she said.