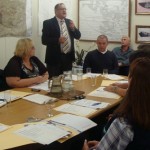 The following article appeared in the Weekend Post recently, and speaks for itself regarding the impact that the DA is having in the lives of ordinary people in the province:

AFTER threatening the Eastern Cape Housing Department with legal action, a Bay grandmother’s 10-year housing nightmare will soon be over.

After almost a decade, Regina Windvoël’s officially approved, government-sponsored RDP house has yet to be completed after a contractor abandoned the project with only the foundation laid. Windvoël still lives in a shack on the property.

As a last resort she sent a letter expressing her grievances – through DA housing spokesman Dacre Haddon (MPL) – to Housing MEC Nombulelo Mabandla on July 14, threatening to take legal action if the problem was not resolved soon.

This week an official from the department and a contractor arrived at Windvoël’s door to give her some good news.

Once paperwork is completed, a house of 40m², using alternative construction methods and purportedly stronger than the normal RDP house, will finally be erected.

In December 2000, the 52-year-old grandmother’s application for an RDP home was approved.

The application document states that Windvoël was entitled to a R16000 subsidy for the development of a property in Motherwell, and the amount was subsequently paid over to a contractor.

However, soon after construction workers had begun work on the foundation they “disappeared and never returned”.

Haddon said after being assured by the department that the matter would be investigated nothing had happened for months.

In the letter, Haddon warned Mabandla the matter could become the subject of a court case against the department and demanded a reply within seven working days or legal recourse would follow.

Haddon said: “This matter, reported to the media in February this year, highlighted how Windvoël was living in a shack on her plot after the contractor failed to complete her house.

“The plight and loss of dignity as well as exposure to the elements are daily challenges Windvoël faces due to the incompetence of the department.

“The contractor has fled and no legal criminal action is taken against him while this woman suffers.”

He added the fact that the matter had taken so long to reach its conclusion showed the “contempt with which government treats housing beneficiaries”.

However, he was grateful to the department, the premier and MEC for “at last hearing our call and acting so swiftly to try and rectify this problem”.

“In order to facilitate progress ongoing liaison with the department, contractor and Windvoël will take place regularly until Windvoël is satisfied at the completion of the house owed to her a decade ago,” Haddon said.

For Windvoël hearing she would finally be receiving her house was one of the happiest days of her life. Although she said she had at some point given up hope, this had been renewed.