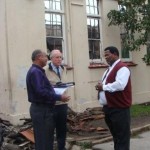 DA MPL and provincial spokesperson on education, Edmund van Vuuren and Nelson Mandela Metro councillor Jeremy Davis has a word with the principal of Khumbulani High School in Port Elizabeth which was razed in a fire o 2 August. The efforts of DA helped in finding suitable alternative accommodation and classrooms for the learners of the school.

This is an extract from a speech delivered by DA Leader Helen Zille at the Suid Afrikaanse Onderwyser Unie Principals Symposium in Port Elizabeth this week. In it, Zille proposes that the Labour Relations Act be amended to limit the rights of teachers to strike.

What most determines a child’s success in the classroom is not their background, their financial circumstances, the curriculum or the resources of the school (although these things all play a role).

The crucial variable is the quality of the teaching.

You do not need to be an education policy expert to know this.   Many of us in this room probably attended poor schools.  I am one of them.

I grew up in the 1950s in what was then a rural part of Gauteng, and my primary school served the community around the Leeuwkop prison. There were no flush toilets, and I remember how the corrugated iron classrooms were slowly replaced by brick structures.  There were children at that school who were so poor that they arrived barefoot.  That is why shoes were not compulsory in my school, because we did not want to distinguish between people whose families could afford shoes and those who could not. We had two or three grades to each class and two languages in each class.

When I went to high school, my parents sent me to a well known school in Johannesburg. When I got there, it was quite clear that my primary education had been as good as the best schools in Johannesburg. This was because my primary school teachers ensured that we could read, write and calculate at the standards required, despite the relative deprivation in terms of physical resources, and the relative poverty of the community.  When I think back, I believe they were so dedicated because they knew it was their responsibility to educate the community out of poverty.

There are many equally dedicated teachers in South Africa today. Many of them are members of the SAOU. I have seen the difference they make in children’s lives.  Our good teachers in our good schools are doing more than any other professionals to build firm foundations for the new South Africa.

But I have also seen the negative impact of poor teaching and weak school management. When teachers spend as little time in the classroom as possible, don’t get involved in extra-mural activities and don’t care if they finish the curriculum or not, the learners suffer.

And there is still far too little accountability throughout our education system for failing to measure up to global education benchmarks.

This is why, in the Western Cape, we are now introducing performance contracts in order to hold principals and deputy principals accountable for learner outcomes. This will form the basis of a differentiated performance management system.  We are determined to move towards a situation where poor performers are managed out of the system, and excellence is rewarded.  In teaching, more than any other profession, one size does not fit all.

But we know that accountability is a two-way street. This is why the Minister, the Head of Department and senior management have performance contracts which are linked to the targets set in our strategic plan.

Our approach includes greater powers to assess teacher performance against provincial and national standards in the classroom, where it counts. That is the crux of the Western Cape Provincial School Education Amendment Bill which we hope will be passed into law by October.

There are other noteworthy aspects to the bill which, taken together, will help us provide a globally competitive education for more learners in the Western Cape. These include:

Of course, this bill – particularly the provision to assess teacher performance in the classroom – will be controversial.  But we believe it is essential. Furthermore, the good principals and good schools in the province realise that if we have to get to the heart of the problems in our weakest schools, we must understand what is happening (or not happening) inside the classrooms, that everyone is present, punctual and prepared, and that the syllabus is completed in time.

On this note, I should commend the SAOU for limiting its involvement in the strike to defined period and for condemning the violence and intimidation of some strikers.

Like the SAOU, we support the right to strike, but we also believe that rights should be exercised in a way that limits (as much as possible) undermining the rights of innocent parties.  The actions of some union members will undoubtedly mean that many learners will fail their matric, or fail to meet the entrance requirements of tertiary institutions.  This is a tragedy that will have life-long consequences for them and their families.

When it comes to exercising our rights, they are always balanced by our responsibilities and the rights of others. I believe SAOU and some other unions, have found the proper balance in the current industrial action.

In his speech to Parliament, the DP’s Roger Burrows neatly set out the dilemma that teachers face when it comes to industrial action.

“The particular position of teachers, their status and position in society, particularly with regard to their conditions of employment, is a very complex one. It is one in which society itself views teachers occasionally as professionals, sometimes as workers and sometimes as servants. The teachers themselves have a similar problem. Some of them view themselves as professionals and some as workers. This is not peculiar to South Africa, and I must make this absolutely clear. Throughout the world the vexed question of teachers and their role of status regarding their conditions of service is one that has raised tensions significantly.”

In his speech, Burrows noted that different countries have approached the rights of teachers to strike differently. Some do not allow teachers to organise at all. In others, staff associations are allowed but not unions. There are also countries which allow only one union.

This is why we do not agree with SADTU’s attempt to destroy the other unions. We strongly oppose SADTU’s proposal to amend the constitution of the Education Labour Relations Council (ELRC) to increase the threshold from 50,000 members to 100,000.  We believe this is a transparent attempt by the union to stop the exodus of its members, who are increasingly disillusioned with the tone, style and management of their organization.

In this regard, it is important to note that, according to Western Cape Education Department statistics – only a third of SADTU members in the Western Cape have actually gone on strike.

It is obvious that many unionised teachers – whether they are SADTU, NAPTOSA or SAOU – take their responsibilities as seriously as their rights.

In his speech to Parliament back in 1993, Roger Burrows made the point that even in countries where the teacher’s right to strike is recognised, there are often limitations on this right. Noting the illegal conduct of some union members in a strike at that time, he argued that South Africa needed to include some limitations on the right of teachers to strike. As he said:

“We need to make quite sure that if we in this Parliament are going to give teachers the right to strike legally, we must hedge it around with sufficient conditions to ensure that parents, more than anybody else, are at least consulted, at least brought into the entire process of striking. I say this because, with all due respect, it is not simply a situation between the State as employer, and the teacher as employee. It involves children, not factory goods or commercial services.”

I am pleased to announce here today that the DA’s team in the national Parliament has begun drafting a Private Members Bill to amend the Labour Relations Act to codify the conduct of teachers who go on strike. The limitations that we will propose are – in fact – already largely followed by the responsible unions. We believe that, given the universal condemnation of the behaviour of some strikers, the time is now ripe to enforce the ethos of responsibility and accountability in this sphere as well.

Our Private Members Bill will propose a number of measures, including:

We believe that these three measures will go a long way to restoring some balance between the rights of teachers to strike and the rights of learners to learn.

I look forward to engaging with you further on this proposal, as well as our plan to turn education around in the Western Cape, which is the one province where we can turn our words into actions because the voters made this decision.

This is an awesome responsibility, because we have to set the benchmark, and develop the strategy to demonstrate that excellence is not only possible in our education system, but essential.  Our country’s prospects, and the prospects of all our children, depend on it.

Thank you for the enormous role the SAOU is playing in this process.  I hope that within five years, we will all see the positive difference.