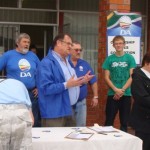 MPL Dacre Haddon (middle) and activists from Ward 8 in Port Elizabeth held an information table at the Ron Forlee Business Centre on 18 September.

However, there are concerns that the well intended plans may only start bearing fruit in the long term with the short term urgency posing a challenge to the department.

The current vacancy rate of 25% applies in the revenue collection department. Following previous media reports regarding low traffic fine collection rates in the province, Haddon asked a further Legislature question to the MEC for Transport in this regard.

According to the MEC, apart from department officials collecting monies from magistrate offices and staff collecting in terms of the new Trafman system, it would appear that the Adjudication of Road Traffic Offences system (AARTO) would be the remedy to the problem.

However, the further delay in the introduction of the AARTO demerit system will not see any improvement in traffic revenue collection in the short term.

Furthermore, the asking for tenders to supply traffic cameras is well and good but it does not solve the physical effort in collecting fine revenue from erring motorists.

“In order to solve the problem the department should enter into partnerships with collection agencies or privatise this function.

“By doing so the public would be aware that every fine issued would be collected (unless disputed legally) and the attitude of drivers would change knowing that they can’t ignore paying fines any longer,” Haddon said.

“The issue of revenue collection in general remains a challenge for government.

“The non-collection of revenues, taxes and fines has a negative effect on departmental budgets and the ability to deliver services especially to the poor and marginalised communities.

“It must remain a priority to ensure that whatever measures are put in place to collect revenues are effective, cost efficient and go towards the betterment of the lives of all people in the province,” he said.