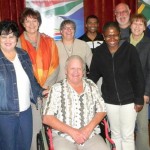 Quigney is regarded as one of the oldest suburbs in East London and was once a vibrant residential area with many shops and a large railway component.   Today it consists mainly of hotels along the beachfront, residential homes and many student accommodation establishments as well of blocks of apartments.    The resident mix varies from students to older residents of all races and nationalities.   Many foreign nationals also reside in the area today.For the past eight years, efforts were made by the DA to establish a branch in this area but it never materialized.    It was largely due to a lack of interest and a low membership figure.  Through the hard work and dedication of councillors and ward members, a DA branch was launched, for the first time ever, on 21 September.

Close to 30 eager members attended the launch, which was addressed by MPL Veliswa Mvenya.

The branch executive is fully representative of the area and it consists of people of all races, women, and disabled persons.   The branch executive is to meet soon to strategize and make plans for the upcoming elections.   The demarcation process in Buffalo City resulted in the Quigney being slotted in with the CBD and portions of Baysville to form the new ward 47 which the DA hopes to capture in the forthcoming elections under the guidance of the vibrant new branch.