NOTHING TO BUZZ ABOUT THE PEDDIE BEE KEEPING PROJECT – CUPIDO 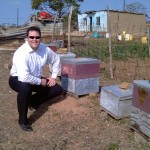 Member of the Portfolio Committee on Economic Development, John Cupido, photographed during a visit to a bee keeping project in Peddie.

As clearly proven by the findings in the report of the Economic Development committee tabled in the Legislature during its sitting in Alice this week, the department needs to do its research before approving funds for community projects, says MPL John Cupido.

Just outside Peddie, a community bee keeping project was funded with R234,000.00 of taxpayers’ money to “uplift the community”.

However, according to Cupido,  the department failed to do the following:

“From our visit, it was clear that the community tried to make the project work, but based on the department’s failures above, they were doomed to fail.

“The committee, via its report, is recommending for the department to secure “feed” for the bees, and to plant flowers in a clearly arid stretch of land in the middle of a drought. Both these are neither short term nor viable solutions.

“The major concern that I raised in the committee and will continue to raise in the house and via Parliamentary questions is that the departments within the province that fund community and Local Economic Development (LED) projects are just not doing the required research in viability of projects before “dishing out” taxpayers’ money. In many to most cases there is no follow-up oversight to secure sustainability of these projects. Two hundred thousand rand here, a million rand there, some projects as much as R15 million! It all adds up, meaning that hundreds of millions of rands of hard earned taxpayers’ money is being wasted, not by corrupt officials or community members, but by the incompetence and/or laziness of departmental officials.

“The Democratic Alliance would ensure that procedures and processes before approving funding of LED and community projects would be relooked and proper departmental policy be drawn up on the oversight of these projects. It’s not always the failure of the community; it’s the department that is failing the community,” he said.