OPPORTUNITY FOR PARLIAMENTARIANS TO LISTEN – MVENYA 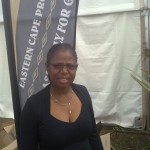 DA MPL and member of the Portfolio Committees of Local Government and of Agriculture, in Alice this week.

The annual Taking Legislature to the People programme in Alice this past week was an opportunity for parliamentarians to listen to the problems and concerns of ordinary citizens.

MPL and provincial local government portfolio committee member Veliswa Mvenya welcomed the chance to interact with people at ground level.  “As the DA we will not allow that this event is like a talk show whereby people complain and nothing happens. We will make sure that issues that have been raised will be addressed before the upcoming municipal election.  The DA does not just make promises.  We were not in Alice to campaign.

She said everything that was raised by the citizens of Alice could be attributed to a lack of monitoring and lack of strong forum for Intergovernmental Relations (IGR).

“It is obvious that between the municipality and government departments the one does to know what the other is doing.  If for instance, the municipality gives out tractors and the department of agriculture also gives out tractor to the same ward that means the IGR is weak.  We visited a project that was funded by Social Development, but officials from Agriculture are claiming the same project.

“After 16 years for democracy and black lead government, 95% of the people who attended this assembly were complaining bitterly about extremely poor services.  It means something is wrong,” she said.

“Government is not doing enough in trying to improve life of the people in rural areas; government is not monitoring the awarding of tenders.  We cannot have people complaining about the lack of scholar transport on the one hand, while on the other the same contracts are being renewed, which means only some scholars are benefiting and others are suffering.  Even the MEC could not give me a satisfactory answer to an oral question on the issue,” Mvenya said.

“The DA welcomes this occasions like this for interaction with the public.  We will not lose heart and through oversight in the portfolio committees and other tools to our disposal such as parliamentary questions, will continue to fight for the plight of people in this province.  We hope that eh municipal elections next year will serve as wake-up call to the ANC that they are not delivering on their promises,” she said.