PIENAAR: HEALTH MEC SHOULD STEP DOWN 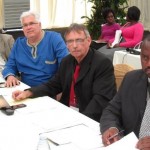 DA MPL Pine Pienaar has this week called for the resignation of the MEC Health.  He was commenting on a report by the Portfolio Committee on Health, tabled in the Legislature this week.

“Clearly MEC Phumullo Masualle, who is also the provincial chairperson of the ANC in the Eastern Cape, cannot hold down both positions.  The Democratic Alliance calls on the MEC and his top officials to do right thing and step down,” he said.

“On top of this, 453 additional cases of financial misconduct have been reported in the Eastern Cape Department of Health.

“We are living in a province where the portfolio committee on health regularly reports to the Legislature that X-ray machines are more faulty than functional, that more than often there are no x-ray films available, that hospitals do not have sufficient vehicles, that the linen is dirty, funds are misallocated, medicines do not arrive at clinics and hospitals, there is a lack of medical equipment, maintenance on buildings has last been done in the 1980’s and that we do not have enough staff to run even half of our facilities.  The department is 64% under-staffed.

“Recently the casualty unit at the Port Elizabeth Provincial Hospital was closed without any warning; a note was placed on the door advising people to go to the casualty unit at the Livingstone Hospital. The reality is that the poor people who voted for this government to address their needs are now queuing for hours on end for TB medication and antiretroviral drugs without hope of receiving it.  TB patients have developed extreme resistance to drugs, not because they are not willing to take the drugs, but because when they come to collect their drugs, the drugs have not been delivered to the clinics.

“With the second largest budget in the province – R13,46-billion – the department of health has a moral and professional responsibility to provide a service to the electorate.

“The Democratic Alliance believes that if we spend half of the money which is being wasted on mismanagement on clinics and primary health care, we will be taking the pressure off our hospitals.

“If we provide a 24-hour service at major clinics, manned by properly trained staff, the evidence is that the relief on hospitals will be so big that we would be in a position to clear out the backlogs.

“On the maintenance front the situation is so bad that in certain hospitals even burnt out light bulbs are not being replaced anymore.  If we can get small local maintenance businesses to paint hospitals, repair pavements and doors and then maybe we won’t have to write in our portfolio committee report that the Tower Psychiatric Hospital in the Nkonkobe Municipality was last painted in 1985.

“The fact of the matter is that the time bomb this government has created in healthcare in this province is ready to blow and there is really nothing the ANC can do to prevent it.

“The Health MEC and his officials do not have the capacity or knowledge to work this miracle. It is time for a new team,” Pienaar said.