STEVENSON: SPELL OUT HOW TO DEAL WITH OVER-EXPENDITURE IN EC 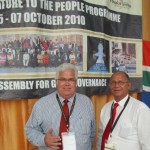 Legislature Leader Bobby Stevenson and colleague Edmund van Vuuren at the Taking Legislature to the People event in Alice.

The provincial treasury must spell out in clear terms how it is going to deal with the question of the projected over-expenditure of R3 billion in this province, DA Legislature Leader Bobby Stevenson said this week.

Last year the province overspent by R2, 7 billion, of which R2 billion will be top-sliced over the next few financial years.  The main culprits are the departments of education and health.

“In a response to a question which I posed to the MEC for Finance, Mcebisi Jonas, in regard to over-expenditure in the current financial year, he indicated that top-slicing was one to the strategies they would look at to deal with the over-expenditure.  He also pointed out that they were engaged in discussions with national treasury in relation to financial assistance.  But nothing was said about a general bail-out,” Stevenson said.

“A general bail-out for this province is highly unlikely given the state of the national fiscus.  If we are to continue to engage in top-slicing, we will continue to spend tomorrow’s money today.  This means there will be less and less in future budgets for service delivery.  Top-slicing will eat away from one side and increases in salaries for civil servants will eat away from the other side.

“We therefore need more innovative ideas from provincial treasury besides the turn-around strategies and technical support units that they have established.  I do however welcome the fact that the MECs for Finance, Education and Health meet on a weekly basis to deal with expenditure in these departments,” he said.

The DA proposes the following solutions to the financial woes of the Eastern Cape: