A REMINDER WHO WE WORK FOR: CUPIDO 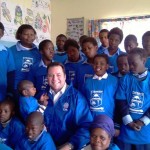 MPL John Cupido visited the Ethembeni Special Daycare Centre in Sada recently after he was told about the good work being done there by DA activists.

“The school is exceptionally well-kept and clean and the staff are fantastic people – they didn’t strike during the national action in August.  The warmth I saw there you don’t see every day,” Cupido said.

An international organisation is sponsoring an educational trip to the coast for the school but the children were in need of T-shirts.  Cupido was able to provide this with a reconstructed logo of the school on the front.

The 38 children at the school mostly have cerebral palsy and other mental handicaps.

“What I was welcomed with was a kind of warmth one does not always get and personalities that reminded me that the physically and mentally challenged has a lot to contribute to society.

“This was the main theme in my last speech in the Legislature as spokesperson on Youth, Gender and Disability, where I concentrated on the mainstreaming of the physically-, and to an extent mentally challenged, within the employment sector.  Society needs to realise that people generally are only disabled because we see them as disabled and not because of their physical challenge.

“By placing the right people in the right places businesses can achieve their employment equity plans which in turn contribute to their BEE ratings.  For example, in a security company where certain employees monitor CCTV screens, it has been proven that the hearing impaired are far better suited for this job than a fully able-bodied person because when one looses one of your senses the others are enhanced.  This means that a deaf person is more likely to notice things using just his eyesight than someone who can hear.

“Does a switchboard operator really have to be able to walk?

“It was a truly humbling experience and reminds me why I do what I do and who I work for other than the taxpayer,” Cupido said.