AUDIT OUTCOMES ARE ABOUT HOW ADMINISTRATION IS PERCEIVED – STEVENSON 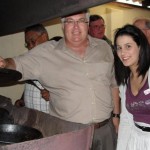 Leader in the Legislature, Bobby Stevenson, with Karla Terblanche, daughter of Nelson Mandela Bay Municipality DA councillor, Pieter Terblanche, at a recent potjiekos competition between the DA councillors of the Metro.

Audit outcomes are not just a technical exercise but have a dramatic impact on how a province is governed and how its administration is perceived. Investors tend to be attracted to areas where the administration is best. This in turn influences employment opportunities. It is within this context that one should view the audited outcomes in the Eastern Cape.

Although the trend is moving in a better direction, it should be noted that Health and Education account for over 70% of the budget. This means that the vast bulk of provincial expenditure is not being accounted for. These are critical areas of service delivery that impact enormously on the people of this province.

In both Health and Education the Auditor General reported in a recent Scopa meeting that there is a complete breakdown in controls as a result of the departments being susceptible to major fraudulent activities.

With regard to Education he pointed out that there are allegations of syndicates within the department and fraud and corruption appears pervasive.

In both Education and Health, he pointed out that the culture and attitude of leadership required urgent attention.

The DA believes that a number of steps should be taken to fix the ongoing problems in these two major departments.

1.       The MEC for every department should sign a performance agreement with the Premier.

2.       A skills audit must be conducted of senior management in the Departments of Health and Education to determine whether or not people are fit for purpose. If not, they must be put to terms and dealt with.

3.       Scopa reports for the previous financial year must be finalised before the new budget is introduced.

4.       The vacancy of the HOD of the Provincial Treasury needs to be filled as a matter of urgency as it has been vacant for almost two years.

5.        Provincial Treasury needs to provide tough leadership so that sound financial management is restored to this province.

6.       The provisions of the Public Finance Management Act need to be rigidly enforced.

7.       There needs to be tender reform in this province to ban civil servants doing business with the province. This simply amounts to double dipping.

The bottom line is that poor administration and corruption eats away at our resources that are there for service delivery. This means that the poor of this province continue to suffer.

In contrast, in the Western Cape all 25 public entities and government departments received clean audits. This goes to show that where the DA governs, the DA governs well.

The DA will continue to fight hard for sound financial management in the Eastern Cape so we can achieve the same clean sweep that was achieved by the Western Cape.