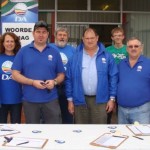 Local Government spokesperson Dacre Haddon has written to the MEC for Local Government requesting a provincial intervention into the financial affairs of the Great Kei Municipality.

A report by the Auditor General which was released to the municipality shows horrendous financial irregularities.  Grant money running into millions is unaccounted for and not properly recorded in financial records.

Furthermore, grant income could not be compared to grant expenditure and such expenditure was not disclosed as required in terms of section 23 of the Municipal Finance Management Act (MFMA).

Other horrors include tender awarding of R599 000 that could not be confirmed, salary bills are unreconciled and electricity income exceeds the amount stipulated by the National Electricity Regulator.

The stated accumulated surplus of R1.9 million was inflated to R11.2 million.

The stated income to the municipality of R43.7 million exceeds the ledger amount by R 9.4 million.

The verification of proof of ownership and values of assets and disposal thereof was also questioned as were a myriad of other questionable financial practices by officials of this municipality.

“The cavalier and cowboy manner in which municipal officials misuse public money must now stop.  As a result the poor, who rely on grant money, suffer and are forced to live with added misery to their lives,” Haddon said.

“I have written to MEC for Local Government, Sicelo Gqobana, to intervene in terms of section 138 (f) of the MFMA”.

In addition, the DA has also asked for provincial intervention in terms of section 139 of the Constitution and has also written to the Chairperson of the Portfolio Committee on Local Government, asking for an urgent oversight visit to this municipality.

“The DA will use every resource at our disposal to ensure that those responsible are made to explain this mess and if necessary lay criminal charges against guilty officials in this matter,” he said.