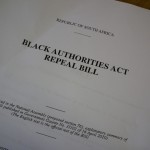 The Act, promulgated in 1951, allowed for the creation of traditional tribal, regional and territorial authorities initially run by the Native Affairs Department, but with the promise of self-government in the future.

It was a legislative cornerstone of the apartheid by means of which Black people were controlled and dehumanised, and is reminiscent of past division and discrimination.

The DA in the Eastern Cape welcomes this long overdue process and hopes that all obsolete and repugnant leftover legislation from the previous era will be removed soon.