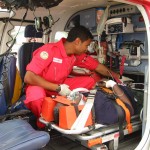 New provincial legislation in the Western Cape will regulate ambulance services in both the public and private sectors. To date there were no regulations that determined what defines an ambulance, the minimum requirements for such a vehicle and what performance targets they should be measured by.

This legislation is a first-of-its-kind in South Africa. To date there has been no legislation, nationally or anywhere provincially, to regulate ambulances.

Before this legislation there were no regulations that determined what defines an ambulance, the minimum requirements for such a vehicle and what performance targets they should be measured by.

The Western Cape minister for health, Theuns Botha, said: “The dearth of standards and regulations meant that patients were all too often left at the mercy of fly-by-night operators that parade themselves as legitimate ambulance service providers who do not have the necessary qualified personnel, safe vehicles or equipment.

“The legislation provides a foundation of standards and regulation from which to launch competent ambulance services and offers the opportunity for the Western Cape Department of Health to better manage the operation of ambulance services.”

In terms of the legislation the ambulance services inspectorate will fall under the auspices of the Department of Health, which will enable the Department to hold Emergency Services to account for services rendered.  To date this has been a grey area – this is simply not acceptable. Under the authority of the provincial department’s licensing division, the department will be able to manage the licensing of services to the benefit of patients.

The legislation will facilitate a closer regulated relationship between public and private sector ambulances. To date the Department of Health has had difficulty contracting private sector ambulance services because of the lack of standards on which to base service agreements.  “This improved relationship will grow the pool of services available in emergency situations, and strengthen the network of emergency services to the people of the Western Cape,” said Botha.

Botha said: “This legislation is fundamental to ensure a quality patient experience for our emergency patients and should have been on the table a long time ago. It is way overdue.  Once the legislation has been signed into law, ambulance services will have one year to become compliant.”