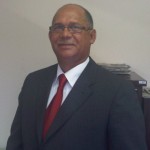 The Democratic Alliance is cautiously optimistic about the appointment of Advocate Modidima Mannya as Superintendent-General of the Department of Education in the Eastern Cape, says MPL Edmund van Vuuren.

“Adv. Mannya is bringing with him an abundance of managerial experience, gained at the highest level of government institutions,” he said.

“A man of his position and assertive demeanour, displayed during his short stint as HOD in 2000 and 2001, can only be to the benefit of a department which finds itself in a state of collapse, due to financial mismanagement and a lack of accountability.

“The big challenge for Adv. Mannya is whether the department under his management and leadership will be able to wrest control from the unions.

“The DA is looking forward to working with the new SG, in order to cement the ideology that education is the foundation for opportunities,” Van Vuuren said this week.