FAMILY UNIT MUST BE DEVELOPED TO DECREASE VIOLENCE – CUPIDO 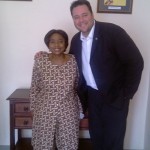 As a member of the Eastern Cape Legislature portfolio committee on Youth, Gender and the Disabled, John Cupido MPL travelled to Namibia last week on a study tour to learn about best practices performed by the Namibian Ministry for Gender and Child Development.

Although the majority of the committee mainly focused on Gender Mainstreaming, Cupido was also interested on how the Namibian Ministry battled issues of violence on women and children, human trafficking and child forced marriages (similar to the “ukuthwala” practices in the Eastern Cape).

As far as gender mainstreaming is concerned, the Namibian government is slowly catching up to South Africa with women holding high ranking positions in government. It must be mentioned that they are achieving their successes without instilling the blanket 50% rule of the ANC government. This has created an environment with less animosity and more acceptance of women with status.

Forced child marriages are not a major issue in Namibia, as they occur more from a socio-economic reasoning than a cultural or traditional basis, and is monitored via their statutory rape legislation.

Violence against women and children and human trafficking are by far the biggest concern for the Ministry. Vigorous women development and upliftment programmes have been “too successful, too quickly”.

This creates an environment where the woman in a cultural household becomes aware of her rights (a good thing) and motivates her to improve her financial situation and that of her family (also a good thing). But once she becomes the main breadwinner in the household (not the best thing according to some more traditional and conservative cultures) it creates a home environment where the child in a family relocates the “head of house” respect from the father to the mother. The husband tends to become significantly less important within the family unit and in many cases leads to extreme frustration, severe drinking, and violence towards the wife and children.

The Ministry and groups, such as Women’s Action for Development (WAD) are trying to include husbands in their development programmes. The stumbling block here is the mindset of many government officials and international funding groups that the money spent on women development should only go to women.

From this it is clear that developing the family as a unit is something that needs to be prioritised in South Africa to decrease occurrences of violence towards women and children.