16 DAYS REMAINS AS CRITICAL AS EVER, SAYS STEVENSON 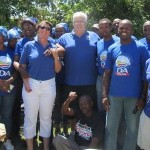 Warning lights are flashing around the issue of the capacity of the Department of Safety and Liaison to effectively oversight the SAPS, Bobby Stevenson told the legislature last week.

“Whereas the department is very good at giving us details of their activities, what we need are reports on the impact that they are making in improving service delivery of the SAPS and reducing crime. This is the ultimate test of the relevance and effectiveness of this department.

“Let me quote examples from the reports in this regard.

“Under general findings on the committee report, on the annual report of the provincial commissioner, it states “there is a weak oversight function exercised by the department of Safety and Liaison over the activities of the SAPS in the Province.” The department did not even analyse the 2008/9 EC – SAPS annual report prior to our meeting with the SAPS.

“In the report on the annual report of the Department, the committee states “the department must ensure that it holds regular meetings with the SAPS in the Province to enable it to fulfil its functions.”

“Similarly, in the oversight report, the committee again recommends ‘the department must ensure that there is effective oversight over the SAPS in the Province by amongst other things, conducting monthly meetings.’

“Crime, after unemployment is rated as the second most important issue impacting on the lives of all communities. The Department needs to pull up its socks when it comes to oversighting the SAPS. And I would like an assurance from the new MEC that there will be a change in the department’s approach in this regard.

“One of the issues that the department needs to improve its oversight on is the capacity of our flying squads to operate at maximum efficiency. At a point last week, eight of the vehicles belonging to the East London flying squad were undergoing repairs leaving them with virtually no vehicles.

“The East London flying squad does not have any high performing vehicles and most of the vehicles that they have are over the 200 000 km mark. This means that they are susceptible to breaking down frequently.

“Similarly in the flying squad in Port Elizabeth, of the seven vehicles on strength for patrolling, three are in the garage currently. This means that the remaining four vehicles run 24 hours per day as they cannot be rotated.

“The problem appears to be a combination of the length of time spent in the garage and the authorisation of payments from the provincial office. I would like to get an assurance from the new MEC that the department will regularly oversight the capacity of the flying squads to operate effectively in the two major cities of the province. What we need is regular inspections and if action is not taken, then we expect the committee to be informed so that action can be taken on a political level.

“Quite clearly, the vehicles belonging to the flying squad, because of the nature of their work, need to be prioritised. The SAPS needs to intervene as a matter of urgency to deal with this state of affairs. When there are not an adequate number of vehicles, the flying squad cannot respond with the speed that it should to crimes such as robberies, hi-jacking, rapes, cash in transit heists and housebreakings in progress.

“The flying squad together with the 10111 centres is our first line of defence against the criminal elements. They need to operate at maximum efficiency.

“During the next few weeks we enter the period of 16 days of activism for no violence against women and children. Without a properly resourced police service, these campaigns simply become voices shouting in the wind. The 16 days of activism provide all South Africans with the opportunity to take heed of the violence against women and children that still ravages our country.

“To improve the situation, the SAPS needs to step up its monitoring of police station’s compliance with the domestic violence act.

“Rape prophylactic kits should be available at all police stations. Every victim of rape should be able to obtain a kit to provide her with the medication necessary to prevent HIV at any police station. And every police officer must know how to use these kits.

“There needs to be increased funding for social workers, psychologists and counsellors both at police stations and at Magistrate’s Courts. One also needs to establish more safe houses and subsidised shelters for victims of abuse. There is nowhere for these victims to go after they have reported a crime.

“In the Western Cape, the Democratic Alliance has established the Chrysalis Academy to identify youth at risk or who are abusive and violent. This academy provides an opportunity for them to undergo a programme for three months before they re-enter their communities. This is a model that should be rolled out to the rest of the country.

“These are some practical suggestions that we suggest to deal more effectively with no violence against women and children.

“South Africa boasts one of the most progressive constitutions in the world. Human rights take pride of place in our founding documents and are a beacon of hope for all who live here. This has resulted in improvements for all citizens, especially the women of this country.

“However, 16 years into democracy, our need for this 16 day of activism for no violence against women and children remains as critical as ever.

“For while women rightly celebrate their freedom, domestically and in our communities, violence against women is still prevalent today,” he said.