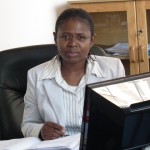 She was speaking during the debate on the 2009-10 annual report of the Department of Agriculture, which had underspent its disaster management grant by R22.2 million. The department also underspent its budget for the Comprehensive Agricultural Support Programme (CASP), which is meant to address backlogs in agricultural infrastructure development.

“Drought was declared in the province. One cannot justify under spending on the disaster management grant. This province does not have economic boosters like mining. We are heavily dependent on agriculture. If the farmers cannot be assisted, many poor families will go to bed without food at all,” she said.

“Furthermore, it has been brought to my notice that in some of the more fortunate areas where fodder is being provided to farmers, the department took up to two years to pay these suppliers, despite the farmers paying their part. If this practice continues fodder and feed suppliers will have to reconsider their deliveries to these farms.”

Mvenya called on the newly appointed MEC for Rural Development and Agrarian Reform, Zoleka Capa, to consider suggestions by Agri-EC that all rural land managers and landowners, including farmers, communal area residents and nature reserve owners should be compelled by law to restrict their jackal populations. Losses due to jackal amount to R370 million a year.

“MEC, if monitoring is still not taken seriously by the department, we will have to declare monitoring a disaster. Poor or no monitoring is contributing to the collapse of agriculture in the province,” she said.