VAN VUUREN CALLS FOR INVESTIGATION INTO EDUCATION OVER EXPENDITURE 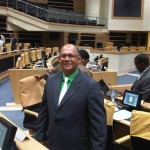 A total of R17. 372 billion was budgeted for personnel expenditure which represents 76.6% of the total budget for the department of R22. 680 billion for the 2010-11 financial year.

“The Provincial Department of Education was warned in 2009 by the National Department not to proceed with implementation of salary adjustments. The Provincial Department, however, chose not to heed the call, but to implement without receiving the necessary endorsement. This transaction, which was not endorsed, is beyond the framework of the law and thus becomes irregular and unlawful. This department is guilty as charged,” he said.

The Department of Education in the Eastern Cape upgraded the posts of 1 043 office based educators to the tune of R47.594 million per year, since 2009, without the necessary processes and procedures being followed for salary progressions. The current amount paid for irregular salary adjustments is +- R80 million, which the department has not budgeted for.

Other contributors to the projected over expenditure are the implementation of Occupation Specific Dispensation (OSD), the underfunding of OSD and Improved conditions of service, the increase in the 2010 post establishment for schools with 4 077 posts, unfunded mandate for Early Child Development centres, 142 FET College lecturers who elected to remain with the department, 152 displaced officials and 5 000 double parked educators.

“The Democratic Alliance is of the opinion that although these salary increases have received the vetting of the Executive Authority, due processes were not followed, and as such must be corrected. Stakeholders who are involved must be informed about the department’s intentions, as well as the possible financial implications.

“We welcome the fact that the department has set steps in motion to reverse all irregular payments made to office based educators and hopes that this will materialise.

“The DA calls upon the newly appointed MEC, Mandla Makupula, to lodge a full scale investigation as to why implementation of irregular salary adjustments went ahead without the necessary endorsement to effect such payments,” Van Vuuren said.