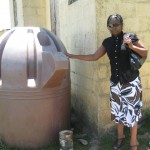 Brown plastic tanks were dropped off some eight years ago to make toilet pits at each house. However, they have been left lying there ever since, and residents are now using them for their drinking water.

“I was shocked at what I saw. These are RDP houses; it’s not as if these are temporary shacks. We are talking about people’s homes,” she said.

“People need to realise that there are alternatives to the ANC government. The local government elections are an opportunity to bring change in communities”.

The DA aims to address the need for adequate shelter by putting in people’s hands the tools, knowledge and resources they need to take care of their own needs and meet their own priorities, with the assistance rather than the instruction of the state.

The objective is to empower people and communities to make key decisions on housing for themselves, with the state providing financing and back-up support for the very poor.

In an Open, Opportunity Society for All, every citizen should have the opportunity to enjoy the benefits of a home, in the way that he or she feels is best able to meet her particular needs.

The state has a critical role to play in working to create such an environment. In a country where so many citizens are desperately poor, only a fraction of the population can hope to enjoy these benefits without assistance. The state must do its best to help those who cannot do so on their own.

However, more than seven million people live precariously in shacks or derelict buildings or on the streets, and the government’s efforts have done little to make a dent in this.

There are various reasons for this. The model of housing delivery chosen is neither practical nor affordable in South Africa’s circumstances. As a result, it has delivered an often sub-standard, often unsuitable product to only a small number of those in need, with little focus on people’s actual needs.

The obligation the state has placed on itself to deliver as many formal houses as fast as possible, in the face of vastly inadequate resources, has resulted in project failures such as the N2 Gateway – which involved the shifting of many thousands of shack dwellers to make room for homes affordable only to middle-income earners.

This approach has also grossly discouraged individuals, CBOs, NGOs and the private sector from contributing their initiative, energy and resources to providing housing for the poor. It has engendered a culture of entitlement while often simply creating new slums.

The DA’s approach will not only maximise the use of state resources, but also turn recipients of state assistance into active agents of development rather than passive victims of fate and the state.

Providing adequate shelter is first and foremost an individual responsibility, assisted and supported by government where appropriate. Most people are quite able and willing to play their role, particularly if bureaucratic obstacles are removed.

Government must create an environment which energises the provision of housing and the development of sustainable and healthy communities, and which makes it possible for people to use housing as productively as possible, but which also allows people to come to their own conclusions and make their own decisions in their circumstances.