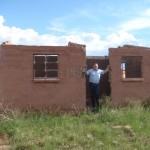 During the second week of February, MPLs John Cupido and Dacre Haddon embarked on a road trip across the Chris Hani and Gariep Districts to deal with specific queries related to their portfolios and to seek other problems that need solving.

Prominent issues that arose in every town that was visited were water supply, not in the sense of the drought that had scoured the province, but severe lack in infrastructural planning, maintenance and repair. The real water crisis in these areas was not the drought, but the complete incompetence of Municipal Managers and the ignorance of ruling party councillors.

Municipalities of the likes of Inkwanca (Molteno, Sterkstroom) that are fraught with corruption, nepotism and severe incompetence need to be placed under immediate provincial administration which Haddon, with the help of Cupido, will be discussing with the Local Government MEC and driving in the Legislature.

In Tarkastad, Haddon and Cupido came across a chaotic housing development, with very badly built RDP houses, many still standing empty and falling apart. Dacre Haddon is taking these atrocities to task and is working towards resolving this issue for the very needy community. Watch this space.

Cupido and Haddon plan to make a follow up trip in the months following the election to see the fruits of their work after they have resolved the issues and plan future trips to areas in the rest of the province as the issues come in.