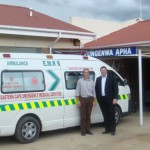 MPL John Cupido (right), on a visit to a rural hospital in the Eastern Cape last week.

Readers invited to have their say:

In doing my constituency work I have met with two provincially-aided hospitals (Indwe and Molteno) that are fighting against becoming provincialised.

In doing a bit of research into the benefits and downfalls of provincialisation vs. provincially-aided hospitals, I have hit a quagmire of sorts.

As a brief explanation, a provincially-aided hospital is given a partial government subsidy to cover their operating and capital expenditure, the rest they need to raise themselves.

A provincialised hospital is fully funded by the Department of Health (DOH) and therefore is heavily controlled by their internal policies. Finally, there are private hospitals that run completely independently.

The situation is this: if the remaining 18 provincially-aided hospitals in the province were to provincialise, then the equitable share that the EC DOH would receive from national government on an annual basis would increase significantly. Somewhere in the region of about R1 billion. Which would instantly decrease the current deficit that the DOH has. Not only that, the number of staff per bed would increase, and jobs would apparently be secure.

Wrong. Provincialised hospitals, as I mentioned, are bound by the policies and workings of the DOH. What this means is that if you want to buy a box of cotton swabs for example, then you would have to utilise the DOH’s procurement procedure with the right required amount of quotes, requisition of funds, approval thereof, etc, etc. This can be avoided with reliable forecasting for supplies and by having a functional DOH like the DA run Western Cape, but as we know, getting anything done timelessly by a department in the Eastern Cape is virtually impossible.

A provincially-aided hospital can purchase supplies within a few hours, and that includes having to get the required three comparative quotes.

Other factors that strengthen the case of provincially-aided hospitals to remain as such is that they run significantly more cost efficiently than provincialised hospitals. The DOH is famous for not paying its bills, resulting in their power or supplies being cut, maintenance does not get done timeiously — just to mention a few things that are the result of a bureaucratic and broke department.

There was mention of more staff per bed, right, but as the DOH does not have the money to support this, the positions are frozen.

I have discussed the matter with Mike Waters MP, our Shadow Minister of Health. He confirmed that the party does not have an official national stance on this debate as each province is affected differently. As I mentioned, in the DA-led Western Cape, the DOH is run efficiently and provincialised hospitals can function properly, but in any province like the Eastern Cape, the opposite is true.

Personally I am in support of provincially-aided hospitals, as they are run more efficiently, are more cost effective, and most importantly are functionally better at healing people. I would like to see a fourth category of hospital created: a semi-provincialised hospital that is fully subsidised by government, but allowed to function operationally as provincially-aided hospitals, provided that their audits remain clean.

So, do we push for more money to bring down the provincial debt? Or do we drive the idea of empowered semi-independent hospitals that are more cost efficient to the taxpayer, while being more functional to the patient. I know my bias is clear, convince me otherwise…

Send me your views, ideas and suggestions to john@daec.co.za

Your views will inform a document that I am preparing for discussion in the DA legislature caucus.

Hereby open the floor to you, the reader.