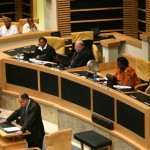 As a nation and citizens of this Province we must be proud about the political achievements in this country during the last 17 years.

Since 1994, South Africa has become a better place to live in.

Government has made enormous progress in improving the life of thousands of people in this province through accelerated housing, water and electricity provision not imagined under apartheid rule.

Madam Premier, in your speech you allude to plans to fight corruption and a broad seven-point plan process in transforming the culture of the provincial public service.

However, Premier of concern is that you do not tell us “HOW” you will implement this strategy.

Honourable Premier you also alluded in your address to the success of clean audits and the implementation of audit and revenue enhancement policies in the province.

While this improvement is pleasing, why are we applauding ourselves with self congratulation when these are statutory requirements that should have been adhered to years ago?

Furthermore Speaker, the Honourable Premier spoke about the new infrastructure in Mthatha.

This only happened because of a Presidential intervention due to chaos in water provision (or rather the lack of it) when some forward planning a few years earlier could have prevented the wholesale suffering of communities in Mthatha.

Another area of concern is the lack of public revenues.

Madam Premier, you have said nothing about how increasing public revenue will take place and why municipalities are fudging their responsibilities to collect monies owed to them.

Honourable Speaker, the main reason why there is service delivery protests and backlogs is because of the government policy of “cadre deployment”.

In an article from the Mail & Guardian in the November 19-25, 2010 issue titled “An independent cadre is a contradiction” by Gavin Davis, he gives a clear definition of cadre deployment and I quote:

“…this principle commits every cadre to defending and implementing the will of the party leadership, wherever he or she is deployed, and even if it means acting outside the Constitution and the law. The individual cadre’s own thoughts, opinions and conscience are irrelevant. They are just loyal cadres.”

Furthermore Honourable Speaker, another quote from the same article states:

“The party structures elbow aside the legally created systems for the appointment of personnel in the public administration, and the undermining of those who are supposed to be in authority is then likely to occur and does. The appointees regard themselves as the deployed cadres of the ANC rather than public servants, and do not answer to anyone other than the alliance deployment committee that appointed them. “

Under his watch, this municipality was driven into the ground and is subject to a section 39 intervention and there were also 11 charges of alleged mismanagement against this individual.

Then Honourable Speaker, this person was appointed to head up the Audit Division (Operation Clean Audit) in the Province.

This person is now deployed as the Municipal Manager of Mbashe municipality.

This deployment and others like it boggles the mind!

Honourable Premier — as head of this province the buck stops with you!

As Captain of this Provincial ship you ultimately carry the can for the success or failures of this province.

If the ship crashes into the rock you, Honourable Premier, as Captain must explain why and be accountable for the consequences.

This provincial ship has crashed into an Ice berg!  This province is dysfunctional with chaos in Education, Health, Local Government and Housing.

This Legislature itself is collapsing — petitions get lost, accounts don’t get paid, there are water cut-offs, the place is generally filthy.

Honourable Speaker where the DA governs it governs well.

Honourable Speaker, allow me to highlight some examples of DA successes countrywide:

Cape Town has been declared the best municipality for service delivery in the country.

The Western Cape Province has received unqualified audits in all departments.

In addition, 94% of residents have access to basic sanitation and Cape Town gives 350 litres of free water a day to indigent people-the highest allocation in the country.

In Cape Town 95% of households have electricity — the highest access in the country.

Midvaal also had the highest satisfaction rating of any municipality in the province.

At the Doornkuil Housing project in Midvaal, 18 000 units are being built at a cost of R8 billion.

Some 60% of these dwellings are for lower income groups. A survey found that two thirds of the low income residents from this project were either very satisfied or satisfied with the quality of their dwelling.

This was the highest housing rating in all Gauteng municipalities.

Honourable Speaker, these are just a sample of how successfully the DA governs in municipalities across the country.

Therefore Speaker the choice facing this province is stark.

If the continued policy of Cadre deployment, where loyalty to the ANC trumps capacity and commitment to do the job, then we will all face the prospect of a failed state.

Alternatively we can as the premier quoted in the conclusion of her speech have “development through unity” working together diverse together for the common good.

The ball is in your court Madam Premier!