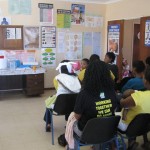 It emerged during question time last Wednesday that primary health care services in the Nelson Mandela Metro and Buffalo city will be handled by the respective municipalities following an oral question by Health Portfolio Committee member Pine Pienaar.

The MEC for Health, Sicelo Gqobana, responded that the law provides that district health authorities should be established to have standardised and common programmes and services across the province and across the country.

“We have realised that Nelson Mandela in particular, and Buffalo City, supported by SALGA, in some instances have the necessary capacity to perform primary health care services. As a consequence of that, we have agreed that the legal route for them to retain that function is to apply for the assignment of powers. We are assisting them to put together a highly technical committee, because it is a long process that requires serious technical consideration. And we are now on the verge of meeting with them, over and above a series of meetings that we convened last year,” he said.

Effectively both Nelson Mandela and Buffalo City in the Eastern Cape are being assisted to apply for the assignment of powers so that they retain the function of providing primary health care in their respective areas. Thank you very much.

The MEC added that the department had submitted the notice of application to the Minister of Health.

“The Minister has given us an opportunity to engage with Nelson Mandela and assist them…we took a view that Buffalo City should be in the same category. So we are now going to engage the Mayoral Committee of Buffalo City so that they also retain this function and do likewise, because they are going to assume a new status post elections,” he said.

He added that the Department had been informed that the Metro’s intention to build three new clinics and replace one clinic was put on hold, due to lack of funds.