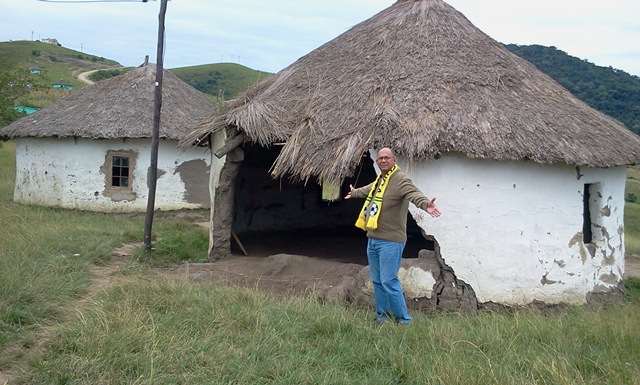 Edmund van Vuuren, DA provincial spokesperson for education at a rondawel at the Thembeni school

The Eastern Cape Provincial Government as first respondent and the South African National Government as second respondent must be taken to court again. They failed to implement the agreement to deliver temporary structures to the seven mud schools by 31 March 2011 as instructed during the court case which was filed on behalf of the relevant schools by the Centre of Child Law at Rhodes University.

This failure was exposed by the Democratic Alliance when Donald Smiles (Deputy Shadow Minister of Basic Education) and I visited these schools on Tuesday, 5 April and Wednesday, 6 April 2011.

The Democratic Alliance committed itself in Parliament four weeks ago to do oversight work in line with agreement stipulations. We visited six of the seven schools in the Libode- and Nqeleni districts. Of the three schools in the Libode district, Madwaleni Senior School was the worst off. The same went for Tembeni Senior School in the Nqeleni district. The seventh school, Maphindela Senior Primary, could not be visited because of bad weather and the vast distance to the school.

The O.R. Tambo Municipality who is the third respondent in this agreement has provided water tanks to the schools but no water. The Eastern Cape Provincial Government has not provided anything, which comes down to scandalous disrespect: firstly towards the children and teachers in these schools; secondly for allowing continued use of the current mud structures, and thirdly for the court of law. This is totally unacceptable behaviour by the government. It must be brought to book — again.

The DA will urge the applicants in this agreement to go back to court to change the agreement into a court order. There is no way that the government can be allowed to violate the rights of children in such a disrespectful manner. The learners interests must be put first and the government must give effect to section 28 (2) of the Bill of Rights as indicated in the South African Constitution.

The DA, upon visiting these schools, expected a hive of activity, but was met with a glaring absence of any contractors on the agreed sites.

We find it absolutely scandalous, although not surprising, that this dysfunctional department has once more ignored the cries from impoverished communities to be provided with adequate and safe school infrastructure. This department should be held, by law or legislation, to account for forcing these destitute learners to be taught under such horrendous conditions.

The DA appeals to the MEC for Education, Mandla Makupula, to intervene without delay and to act decisively, without fear or favour, against those officials responsible for this unacceptable state of affairs.  I will be writing to him in the coming week.

It is now time Honourable Makupula — and the people are watching —  to make tough and unpopular political decisions in order to restore efficiency and effectiveness that will translate in delivering quality education, even to those attending these mud schools in the remote sections of the rural areas in the Eastern Cape.

Honourable MEC, the ball is in your court – don’t fail our children again!