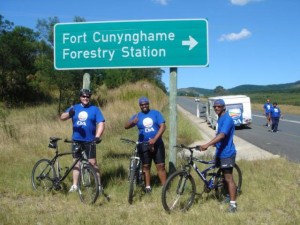 MPL John Cupido (left) took on the open road with DA candidates and councillors for what he called “Cycle for Democracy” to raise funds for his constituency ahead of the municipal election. In the middle is Lukhanji councillor Zuko Mandile and left is council candidate, Jonathan Issacs.

MPL John Cupido decided to get on his bicycle to raise funds for the DA’s election campaign in his Lukahnji constituency earlier this month.

They cycled 200km from Queenstown to East London over three days. Cupido called it Cycle for Democracy.

“In the team were a hunky MPL (read: me), councillors Chris De Wet and Zuko Mandile, ward and PR candidate Jonathan Issacs and a DA supporter, Gilbert van Zyl,” he said.

During the first day, the cyclists travelled from Queenstown to Cathcart (68km).

When the cyclists arrived in Cathcart they were welcomed by a large group of DA-supporters.

“We drove/cycled around town making a noise and had a public meeting that included members of the Ratepayers Association, where I spoke about the DA’s electoral prospects, why supporting an independent is a bad idea and how the community can petition Legislature committees for specific issues.

Day two saw the team take on the trip between Cathcart and Stutterheim (50km).

Cupido said the going was painful initially, with stiff muscles and a tired body from the day before, but once back in the swing of things, kilometre after kilometre was soon put behind them.

The final stretch of 82km between Stutterheim and the end point of Beacon Bay Retail Park was by far the most daunting, with it being the longest stage of the challenge, but Cupido said it was well worth the effort.