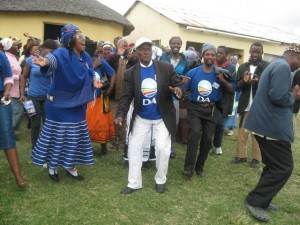 The Blue Wave is everywhere…MPL Veliswa Mvenya at Lwandile village, where 300 former ANC-supporters walked over to the DA after hearing the party’s message.

The bulk of the residents of a village in rural Transkei abandoned the ANC and signed up as members of the DA last weekend.

MPL Veliswa Mvenya visited Lwandile Village by invitation of the local chief.  The village is in the Ngqeleni area in the Nyandeni Municipalty.

“This is a very poor area with no water, no electricity, no roads and no employment. Their ANC councillor is calling them illiterates and does not care about them at all. The DA is their only hope,” Mvenya said.

“I visited the village on 15 April to bring the residents a message of support.  More than 300 of these former ANC-members signed DA-membership cards on the same day.  The venue was at the chief’s place, Komkhulu, even the chief supports us,” she said.