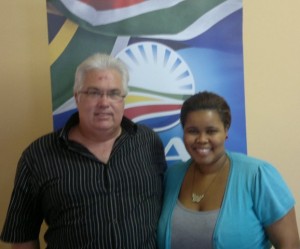 Legislature Leader Bobby Stevenson with Lindiwe Mazibuko, National Spokesperson for the DA, at the electoral college for the party’s mayoral candidates in the Eastern Cape recently.

In contrast to the Western Cape, the Eastern Cape provincial government under spent on capital expenditure.  As at the end of February (one month before the end of the financial year) the Health Department had only spent 50, 6 % of its R1, 344 billion budget.  Education only spent 34, 1% of its R903, 335 million budget.

Roads and Public Works was better at 80, 8% of its R995, 335 million budget.   This means R1, 449 billion of capital expenditure that should have been spent in the province was not spent.

When one adds onto this the billions that are lost to corruption and overpricing one can begin to understand why the Eastern Cape remains poverty stricken and undeveloped.  To provide quality services in our hospitals they need to be revitalised.  To improve the quality of education we need decent buildings. Without driveable roads the economic arteries of the province are severed.

The repeated poor financial expenditure patterns of the Eastern Cape provincial government have become so much of a norm that the media not longer deems it worthy to report tragedies such as these, nor to hold politicians accountable.  The consequences to people on the ground are devastating.  Money that could be spent on alleviating poverty is either mismanaged or not spent.

After 17 years of promises of change individuals need to decide whether they want to wait any longer for that change or whether they themselves will become the change to make this province a place of rising opportunity and hope for all its residents.