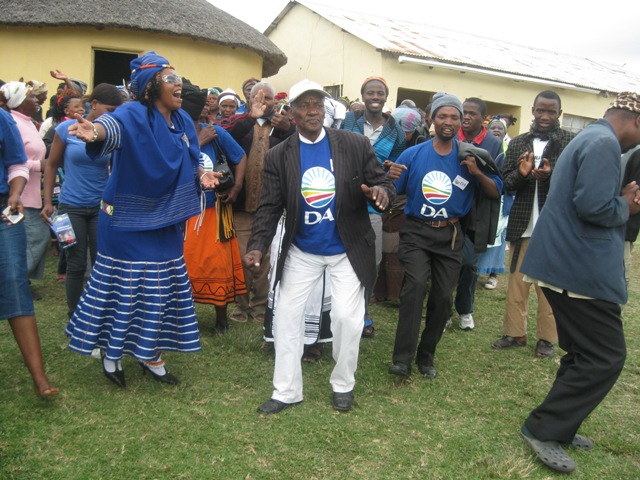 The Blue Wave is everywhere…MPL Veliswa Mvenya at Lwandile village, where 300 former ANC-supporters walked over to the DA after hearing the party’s message.In three days’ time people will go to the polls. The Democratic Alliance is on the cusp of an important breakthrough in this province and for that matter right across South Africa. We will win more municipalities than ever before.

On Wednesday people will go to the polls. The Democratic Alliance is on the cusp of an important breakthrough in this province and for that matter right across South Africa. We will win more municipalities than ever before.

In the Eastern Cape we will bring a coalition government into effect in the Nelson Mandela Metro, we will win in Camdeboo, Kouga and retake Baviaans. There will be surprise results in other municipalities too. Ikwezi, where the opposition obtained 40% in 2009 could be one of those upsets as it is now a straight fight between the DA and ANC.

The DA will grow significantly across the province and be in a position to challenge the ANC for power in many more municipalities in future elections. The base that will build on the 18th will become a showcase of good governance that will influence future results. But only if all DA supporters come out to vote on the 18th May.

It is important that this happens. Where the DA governs, service delivery improves. This has been shown in our province in Baviaans, which won awards for service delivery and revenue collection.

Every independent survey has shown that the DA excels at service delivery and is able to spend its funding.

Where we are strong in opposition we are more powerful to deal with mismanagement and service delivery.

The DA is growing in every community but particularly in the townships and amongst poor people who are hungry for change. They have seen what we have done elsewhere and want that to happen where they live.

There is a new freedom struggle that is being waged in South Africa today. It is for service delivery, jobs, houses and infrastructure that work. The DA is at the forefront of that struggle.