MESSAGE FROM THE LEADER: STEVENSON SAYS AVOID THE QUICKSAND OF MEDIOCRITY 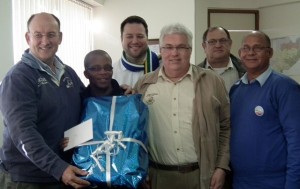 The DA and the Eastern Cape Legislature community as a whole is immensely proud of and inspired by Zolani Bakawuli, who after 14 years of dedicated and very hard work became a DA councillor in the Buffalo City Metro after the recent municipal elections. Cllr Bakawuli had been working as the service officer for the DA in the legislature. The party held a farewell function for him on 27 June. From left to right are: DA Eastern Cape Provincial Leader Athol Trollip, cllr Zolani Bakawuli, MPL John Cupido, Legislature Leader Bobby Stevenson, MPL Dacre Haddon and MPL Edmund van Vuuren

Accountability lies at the heart of both the province’s problems and solutions. At the start of a newly elected term for local government this value needs to be foremost on our minds. Accountable government means that we are committed to improving service delivery and the optimal utilization of resources. It’s about having a work- and service ethic where the people come first and the politicians and political parties come second. Until this spirit is truly engendered in our civil service and in the minds of politicians the people of this province will continue to suffer.

So what needs to be done:

1. Accountability can be improved through leadership from the top. This means the Premier needs to hold members of the executive council (MECs) accountable for the failures of their departments. The Premier should sign performance contracts with her MECs. In turn MECs need to hold accounting officers responsible who in turn needs to do so with the rest of senior management. Simply put, if you can’t perform, you must go.

2. Opposition need to ensure that they are continually asking the tough questions and putting forward policy options that can put this province on a new journey. The current direction in which the ANC is taking this province will ensure that we continue on a downward spiral. There needs to be a radical shift in policy.

3. The media cannot abdicate its watchdog role in holding the provincial government accountable for its actions. By shining the light of public scrutiny on the day-to-day dealings of government, one improves accountability. During the last sitting of the provincial legislature which involved three days of intensive deliberations to pass the budget the media presence in Bhisho was virtually non-existent. The media in general is a powerful institution which should keep the public fully informed on provincial matters. This is simply not happening.

The above points are equally applicable to all spheres of government including municipalities.

Accountability means accepting full responsibility for one’s role and not caving in to mediocrity and the lowering of ethical standards. Our society needs inspired and energized leadership that is courageous enough to ensure that the value of accountability is strengthened by those in government, the opposition and the media. Ignoring this hard truth leaves our society a lot poorer and our province stuck in the mud of mediocrity. Unless accountability is vigorously championed by government, opposition, media, the churches and society in general, the mud of mediocrity can become the quicksand that swallows any hope of turning the situation around. As individuals we all need to do some soul searching in this regard.

The DA refuses to accept this scenario and will continue to be a shining light and a ray of hope by championing this value so our society can progress and experience the better life we all dream of.