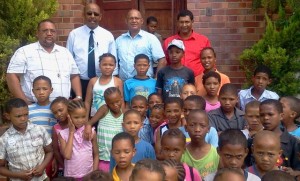 Following the last round of schools visits and the discussion thereof in the Legislature last week the DA stated that reports were gathering dust regardless of resolutions and recommendations made by the House.

In his speech DA provincial spokesperson for education Edmund van Vuuren said: “We have been visiting schools throughout the province for the last couple of years. We have interrogated department officials, we have spoken to school principals and school governing bodies as well as other stakeholders. We have compiled reports and we have deliberated those reports in the House.

“The problem is that the issues that need to be addressed are similar to previous reports.

“What is the sense of us fulfilling our legislative responsibilities in doing oversight over the Department of Education when the reports are gathering dust irrespective of whether House resolutions were taken or not.

“I want to state it unequivocally that we are wasting our time to go and visit these educational institutions because in most cases our recommendations are not considered nor implemented.

“I firmly believe that a House resolution should be taken where the Department is compelled to implement recommendations made by the Committee.

He added that he was feeling uncomfortable to report on school visits that took place six months ago. “Some of the pertinent issues raised in the report are no longer relevant such as the issues of temporary teachers – we all know that temporary educators, whether they are qualified or not, have been reinstated by the Courts. We are also aware that some of the schools where the temporary educators were do not qualify to have temporary educators, based on their enrolment. Certain schools, where there was an increase in enrolment, have not been allocated additional or temporary educators due to the cost pressures of the Department,” he said.

“Since our visit to these schools funds as per the national norms and standards have as yet not been paid to schools. This is unacceptable as schools cannot function adequately without the necessary financial resources. It is no excuse and the management of the Department should be held accountable for withholding these necessary funds from cash-strapped schools.

“Learner-Teacher support material was not delivered to Section 20 when school re-opened in January for the news school year. I just hope that this unacceptable failure by the Department of Education will not repeat itself in the future.

“It was also reported to us that in most instances learners who qualify to be transported to schools were not transported and in some areas they had to walk more than 30km to and from school. I certainly hope that the scholar transport issue has been amicably resolved and that all those deserving learners are being transported to school. As a committee we have been reliably informed by schools that learners were robbed and even raped whole walking to schools. We certainly cannot condone these abuses on vulnerable learners, especially those in the deep rural areas.

“In the last few months I have personally reported seven instances of corporal punishment to the Department of Education. I sincerely hope that these reported cases will be properly investigated and if the transgressors are found guilty, they should be given the appropriate sanction.

“We have also discussed the quintile system at length. I am of the opinion that this quintile system is an unfair system and schools within the same ward boundaries are treated differently. It will be in the best interest of the school communities if there can only be two types of schools fee paying- and no-fee paying schools. Schools have also not been remunerated for learners that have been deservedly exempted from paying schools fees. Schools are still waiting for their monies, “he said.