LEGISLATURE TO THE COUNCILLORS 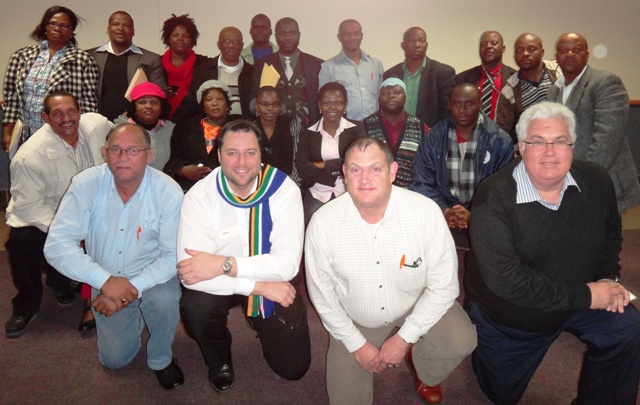 Members of the DA's caucus in the legislature met with councillors from the Transkei-area in Mthatha onTuesday, 12 July. In front: Edmund van Vuuren (MPL), John Cupido (MPL), Dacre Haddon (MPL) and Bobby Stevenson (MPL and legislature leader). Veliswa Mvenya (caucus chairperson) is seated in the second row, in the middle.

As part of the outreach programme of the DA provincial legislature caucus we met with the Buffalo City caucus on Monday, 11 July and had an all-day meeting with the councillors from the Transkei in Mthatha on Tueday, 12 July.

The purpose of these meetings is to improve communication, cooperation and interaction between the legislature caucus and councillors.  In this way we aim to improve service delivery in the province as a whole and to build the DA brand by driving relevant issues.  This will only occur if there is improved teamwork and mutual respect between the different spheres of government.

We extend the invitation to other municipalities for similar meetings.

The battle for 2014 has begun.  Let us continue building on the success of the municipal election results.