LOOS BUT NO HOUSES – MVENYA 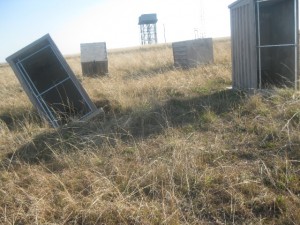 Loos stand abandoned in a field outside Dutywa

Dutywa’s Govan Mbeki village consists of a field of 200 toilets without a single house being built. The site is a playground for vandals. The Mbashe Municipality claims the money was “used for something else” and the contractor is long-gone. Oom Gov would have been shocked.

The frustration for a shack dweller to see the toilets being vandalised and their hopes for proper housing being dashed by empty promises is dehumanising.

I have written to the MEC for Local Government, Mlibo Qoboshiye, and to the MEC for Human Settlements, Helen Sauls-August, to find out what happened to the funding for this project and whether any steps will be taken against officials from the Mbashe Municipality and the contractor, who should be blacklisted if found guilty.

The MEC’s plan to establish a monitoring group to hold mayors accountable for poor service delivery is a step in the right direction. But one can only hope that this is not too little too late in a province where so much money has been wasted in corrupt and fruitless expenditure.

The Eastern Cape recorded the highest level of irregular expenditure in the past financial year amounting to R2,7-Billion. It is particularly frustrating considering that the Eastern Cape had R500-million of its municipal infrastructure grant withdrawn by the national Treasury, because the province failed to spend the money.

People of this province do not have to put up with this. People need not live in shacks, get water from a standpipe and use buckets.

The DA believes in accountable government to delivery service to all the people. This cannot be achieved if the ruling party does not take action against lazy officials and irresponsible contractors.

The DA believes that people should be instilled with a sense of pride and respect for themselves and for property by encouraging self-reliance and ensuring that people do not remain passive and powerless recipients of government handouts.

I call on the MEC to do a full investigation into this failed housing project and to make examples of those involved by ensuring that they are held accountable.