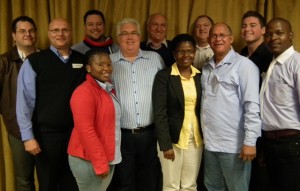 Bhisho MPLs with the caucus of Buffalo City.

On Monday, the 11th July 2011, the Eastern Cape Bhisho Caucus (ECBC) met with the Buffalo City Metropolitan (BCM) as the beginning leg of the ECBC’s Outreach Programme to meet with as many DA caucuses in the EC and to explain the role of the Members of the Provincial Legislature (MPL) and how we can work together to improve oversight, accountability and ultimately service delivery within our province.

As the previous caucus leader, before being elected to the Legislature, it was exciting to walk into a room and see a caucus of 21 councillors, almost double the 11 from during my time there. Returning councillors will bring experience and continuity and new faces are sure to become commonplace within the community of Buffalo City.

The agenda for the meeting was simple… After the introductions and explanations of who holds what portfolio, the leader in the Legislature gave insight on where the DA is in South Africa and the province and what needs to be done to grow the party and ensure better service delivery for all.

After I explained the role and function of the Provincial Legislature and the petition process, an open discussion was held about service delivery issues and queries and how the two caucuses can work better together, including past difficulties, successes and how communication should flow to ensure optimal efficiency.

Both caucus leaders concluded the meeting saying that there is now a better understanding of the functioning of the two caucuses and a refreshed feeling of good cooperation between the two.