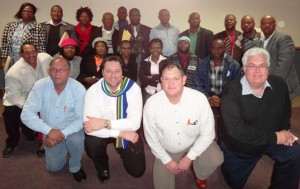 DA MPLs Edmund van Vuuren, John Cupido, Dacre Haddon, Bobby Stevenson (all in front) and Veliswa Mvenya (seated in the middle in the second row) met with councillors from the former Transkei-area recently.

The task of holding the ANC accountable has been made easier thanks to the increased number of councillors in the former Transkei area after the municipal elections on 18 May, says DA MPL Veliswa Mvenya.

“Since they are new councillors, it is imperative that they are empowered.  The Bhisho caucus visited them in Mthatha recently to give them a foundation to operate. This has given them confidence to work in their municipalities knowing that they have MPLs looking after them,” she said.

“This coming weekend we are having another workshop to thoroughly deliberate all the relevant Acts in Xhosa. They were only given a summary for all the Acts.  It is a two day workshop in Mthatha at the Mandela Museum. This is also a team building exercise,” she said.