MESSAGE FROM THE LEADER: CAUCUS MEETS WITH COUNCILLORS 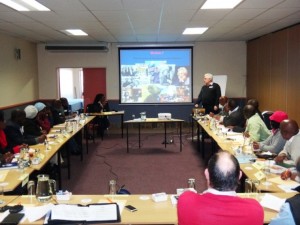 Bobby Stevenson does a presentation to councillors from the former Transkei area during a recent visit by the Bhisho MPLs to the region.

The DA Caucus in the Legislature has embarked on a series of outreaches to bring Bhisho closer to the people.  The provincial government in Bhisho can easily become isolated from the people it serves in a huge province like the Eastern Cape. The Caucus is busy with interactions with DA-councillors in different municipalities. Already we have met with the councillors from all nine councils where the DA has representation in the former Transkei as well as the Buffalo City Metro Caucus. On 8 August the caucus met with councillors from Camdeboo and Baviaans. They have given us a host of issues to take up.

The objective of these interactions is to get a better understanding of the problems in the area and to see how we can assist more effectively.

Collaborative team work is the key to making a greater impact when it comes to resolving an issue.

The tools that members of the legislature have to deal with an issue are as follows:

These are the options that an MPL has to leverage response out of a department and an MEC. In a province where there is both a shortage of funds and a poor administration, it is very difficult to solve every problem. This is very frustrating for the complainant, our staff and ourselves as we try to service our constituents.  Notwithstanding these difficulties, we fight tooth and nail to get results.

These are challenging times and we in the Eastern Cape Legislature DA Caucus are committed not to just making a difference by sorting out individual problems but also making our province as a whole an attractive place to live in, work in and invest.