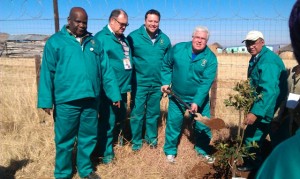 MPLs at the Mandela Day project of the Legislature in Matatiele. From the left are the Speaker, Fikile Xasa, Dacre Haddon, John Cupido, Bobby Stevenson and Edmund van Vuuren.

The DA-caucus participated in the Mandela Day project held by the legislature in Fiva Village outside Matatiele.  “We thought it was important for national reconciliation for us all to be seen to be unified around a common cause on this day. This village is in a very isolated part of the province and took us eight and half hours to drive back to Bhisho, some of which was on a dirt road. When one visits isolated villages such as these one realises how vast the Eastern Cape is. It would have been quicker by an hour to drive from Port Elizabeth to Cape Town,” said Bobby Stevenson.

In the meantime legislature secretaries Annette Rademeyer and Eve Viol collected jerseys, beanies, baby food and disposable nappies, which was donated to the King William’s Town Child and Youthcare Centre.  Legislature staff was also encouraged to make donations for the Komani Psychiatric Hospital in Queenstown.